What we do with the numbers? – Tony Offland, Harper Adams

I look after Harper Adams University’s 1,000 Lleyn ewes. The flock was set up in 2008 and has gradually increased to its current size over the last 10 years. It is a self-replacing flock, with rams bought-in, and runs over 120 ha of reclaimed coal ground in Shropshire. 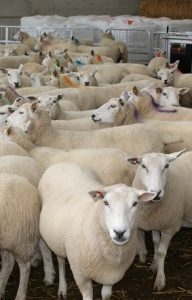 The entire flock has been performance recorded with Signet for over five years. The ewes are mated in three batches; an early group of about 250 in mid-September, a group of 200 ‘B’ flock ewes which are mated to Charollais rams in mid-October and the main flock in November, all tupped at grass. The land does not lend itself to outside lambing so the ewes are housed for a maximum of four weeks before lambing depending on the weather and grass supplies. Ewe lambs are mated to lamb in late April. Lambs are weighed and tagged within 24 hours with information on mother and siblings, ease of lambing and ewe body condition. They are turned out after one or two days depending on the weather. Eight week and 21 week weights are collected, and ultrasound scanning carried out on most of the purebred ewe lambs.

We have changed our selection of breeding females because of the Signet recording. Our targets are improving maternal ability and eight week weights so we have been selecting rams that do that job. We select the ewes that go with each ram carefully to ensure our genetic gains are improving on our key traits.

The flock is involved with AHDB’s Challenge Sheep project, which is looking at factors affecting ewe longevity and lifetime performance. It involves collecting body condition score (BCS) and ewe liveweight at five time points through the year – tupping, scanning, lambing, eight weeks and weaning. Ewe lambs that were born in 2017 and 2018 and shearlings born in 2016 and 2017 are being followed for six years to try and understand the influence of hitting (or not) BCS and weight targets on lifetime performance.

Due to the involvement in Challenge Sheep, we are more careful on how we select our replacements with weight targets established from weaning. We also go through them a few times to ensure we are only retaining the ones that are coping with our system.

The flock is part of the Performance Recorded Lleyn Breeders group, who are investigating the best way to select sheep for worm resistance, including faecal egg counts and immunoglobulin A in saliva and serum.

We are using the information to improve the group’s knowledge on what phenotypes to select ewes on for resistance/resilience to parasites. We are currently tracking the values, but not actively selecting animals on the numbers until we have more certainty about the best approach.

We have been selling young females for several years, but last year was the first year that rams were sold. This year we have 280 yearling females and seven non-registered two year old rams to sell. The females are on sellmylivestock.com. 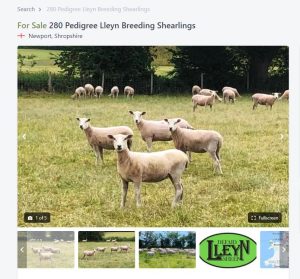